The shirt collar is one of the most important elements of the shirt. Not only is it the most visible part of the shirt, it also helps frame the face. Did you know that the collar could either make your neck appear longer or shorter depending on the height of the collar? Enhance your best features by wearing the right collar for you. Collars come in a great variety and we offer more than twenty different models. They can be divided in to nine main categories, all explained below.

The classic collar is a point collar that is the most common and most balanced collar, because it is suitable for both formal and casual attire. This collar shows off the tie in a nice way, and when wearing a blazer, the points of the collar is not covered by the blazer lapels.
The point collar has probably been around just as long as the modern dress shirt itself. Of course, it has gone up and down in popularities during the years. In the rise of the traditional men’s suit in the 1930s the point collar was very popular. Then again in the 1960s when the skinny tie and slim lapels were a thing, and then again in the 1980s when dressing in a preppy style was hot. Now it is the classic collar for any style, and every man should have one in his closet. 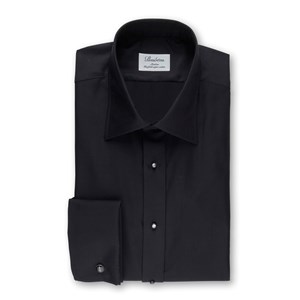 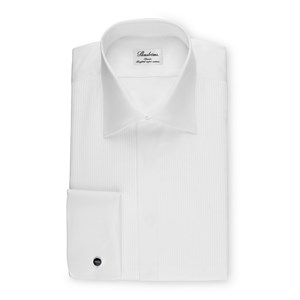 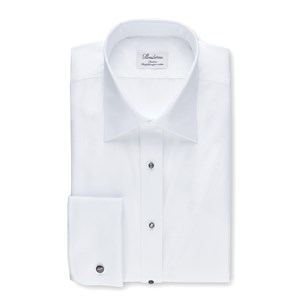 In 1869 the story of the button-down shirt began. It was in England when the polo players found that the collars would flap when they were on their horses. They felt it was very irritating and distracting when they were playing, so they sewed on buttons on their collars, so that the collar would be hold down during matches.
The man who apparently made the button-down shirt fashionable was John E. Brooks, of Brooks Brothers. After a trip to England where he had seen a polo match, he went back to the US and immediately started manufacturing shirts with button down collars, and offering them to his costumers – but at that point it was known as the polo collar shirts. 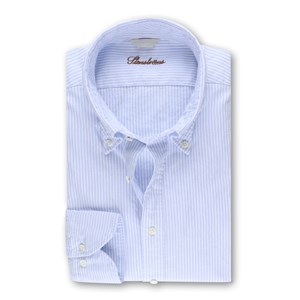 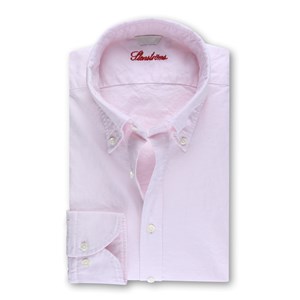 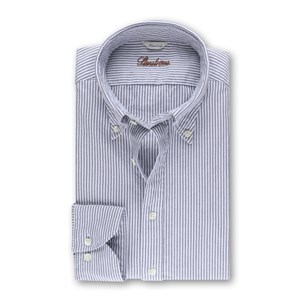 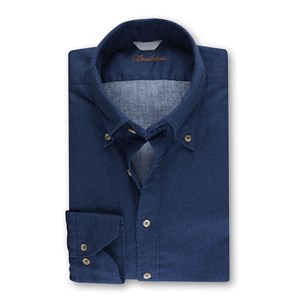 The one-piece collar is cut from a single piece of cloth that extends through the front and doubles as a placket. This allows the collar to stand on its own, because of the support of how the fabric is cut and sown. The one-piece collar is harder to make than a regular collar, which requires a skilled pattern cutter to be able to get the right look and function of the collar. The cloth needs to be cut with precision and the right curvature so that it gets the right look. The collar became popular thanks to the style icon Gary Cooper, in the 40’s and 50’s. Some even called it the Cooper collar. He was a very stylish man that liked wearing suits and ties and mix different patterns. Today the collar can also be called the Rivieracollar. 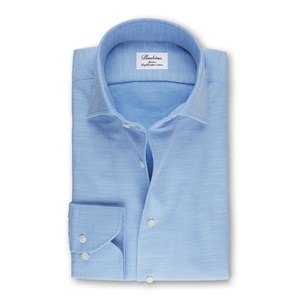 Slimline Shirt With One Piece Collar$285 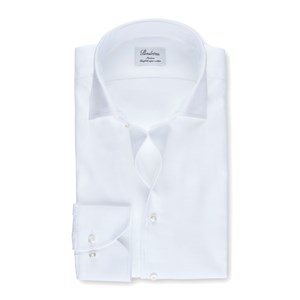 The cutaway collar is a form of spread collar that is defined by the wide distance between the collar points, or the angle of the points. There are many types of cutaway collars, some can even have an angle that is completely horizontal in a straight line.
Following the longer and more narrow collars that were trendy during the 1920s, the cutaway collar emerged in the 1930s as a response to the widely fashionable Windsor tie knot. The cutaway collar can sometimes therefore be referred to as the Windsor collar. The tie knot was both Prince George and Edward VIIIs favourite at the time, and the spread of the cutaway collar was great to really showcase the wide knot.

You could say that this kind of shirt lacks a collar, but actually it´s a standing collar that is just a few centimetres high, usually 2-5cm. A banded collar consists of a simple band of fabric that runs around the neck with no folding.
The band collar is sometimes referred to as the Mandarin for its origin in Chinese gowns, worn during the Imperial China. Although the band collar that we know and love today is evolved from the workwear worn during the 19th century. The workers couldn’t be bothered with wearing a nice white shirt and tie like the upper-class, that’s why they wore the band collar that didn’t need a tie. By the first World War the collar was being worn by soldiers, cowboys and workmen all around the world.

The rounded club collar that can also be called Penny collar, origins from the mid 1800’s as a part of the Eton College’s dress code. The famous school is located outside of London where both prince William and prince Harry has attended. The collar belonged only to the exclusive school club, and therefore was called ‘club’. Later it was adopted by the mods and golfers, even if it still today is used at Eton College. In the 1930’s it was popular to wear your club collar with a collar pin, but today the club collar is worn both with and without a tie. The rounded collar points give a unique look that can be very versatile, depending on how you wear it.

When we think of a Cuban collar, we think of 1950’s bowling shirts and aloha shirts. It is a collar that we more often see on the spring and summer garments, because of its wider and more casual style. The collar can also be called camp collar.
The Cuban collar dates back to the 18th century in South America where the working-class man was wearing them. It was in the 1950’s that it took to the fashion scene for the stylish men.